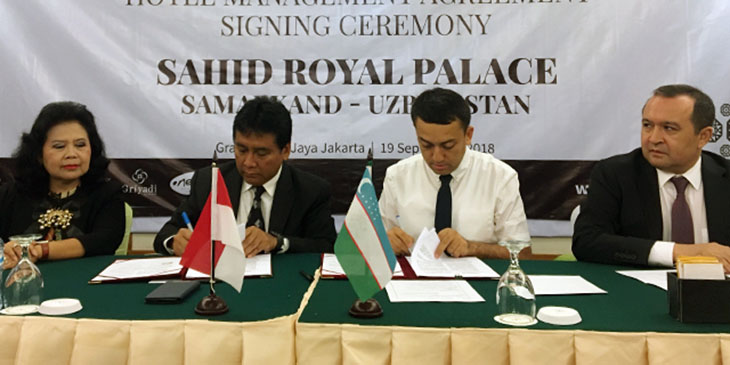 Indonesia-based Sahid Hotels & Resorts is set to foray outside the country with an Uzbekistan property opening mid-2019.

Under the Operational Management Agreement signed in Jakarta on September 19, Sahid Hotels & Resorts will manage a three-star hotel owned by Royal Palace in Samarkand, one of the largest cities in Uzbekistan.

The 65-room Sahid Royal Palace Samarkand will be the company’s launch property. There are also plans for further expansion in the city, including a 200-room hotel in the memorial complex of Imam al-Bukhari.

Hariyadi Sukamdani, president director Sahid Hotel & Resorts, said that as a country that has just opened up after being separated from the Soviet Union, Uzbekistan has seen extraordinary development.

He remarked: “The government is committed to developing the country and strongly encourages tourism to advance and become the main sector. After doing research, we see the big and untapped potential of Uzbekistan. The population is also big, so we want to invest there.”

In addition, Uzbekistan would make an interesting destination for Indonesian Umrah pilgrims as it is home to many relics of Muslim civilisation, such as the memorial complex of Imam al-Bukhari.

Hariyadi added: “Usually the Umrah package goes to Turkey or Jordan, now it can be offered to Uzbekistan as well.”

Ulugbek Rozukulov, ambassador of the Republic of Uzbekistan to Indonesia, said that the presence of the Sahid Hotel & Resorts in Uzbekistan represents potential to strengthen cooperation between the two countries.

“Currently there are no direct flights from Indonesia to Uzbekistan, but flights can be made through Kuala Lumpur,” Ulugbek said.

In addition, there are now direct flights from Jeddah to Uzbekistan.

Not only is Uzbekistan interested to bring the Sahid Hotel & Resorts brands into the country, it is also keen in developing human resources.

Vivi explained: “We have the Sahid University with (high) standards of education, especially in tourism. They realised that skilled human resources are the key to the future of Uzbekistan tourism so we are collaborating to educate the young generation here.”

« Hong Kong gets on board China’s high-speed rail network